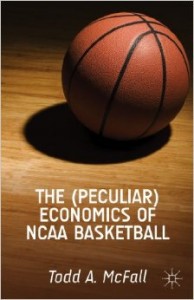 Professor Todd McFall’s book was published on October 16th.  He would like to thank the Farr Fund for enabling access to the data used within the book.

Here is the summary: The economics of NCAA Division I men’s basketball are peculiar because it fails to meet two of the three key operating objectives leagues must weigh in order to be successful. It remains financially successful despite abdicating entirely its ability to hire the best college-aged players and doing little to enhance competitive balance across members. Instead, it continually adopts policies that leverage further the intense fan interest of resource-rich teams. Discussed are the implications of policies like the expansion of the tournament, the adoption of the pod system, the Basketball Fund, and the conference-centric structure of the organization. The consequences of the league’s short-sighted governing policies are catching up to it, as television broadcasting technology has caused an increasingly large resource gulf to exist between the resource-rich superstars and their lesser-known, resource-poor rivals, a result that has damaged the overall health of the league.