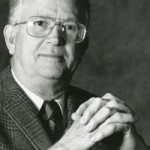 J. Van Wagstaff amassed a number of noteworthy accomplishments during his 28 years on the faculty, but his most rewarding achievement, he once said, was teaching more than 6,000 students.

Leave it to an economist to tally the number of students who took his classes on public finance and micro and macro principles of economics from 1964 to 1992. Wagstaff, who helped establish the economics department in the late 1960s, died on July 13. He was 84.

He is survived by his wife, Marge; three children, Victoria Howell (’80), Terry Williams (’81) and Joseph Wagstaff Jr. (’80); and eight grandchildren. A memorial service will be held at 11 a.m. Saturday at Augsburg Lutheran Church in Winston-Salem; the family will receive friends following the service.

Wagstaff was the father of the economics department, said John C. Moorhouse, the Archie Carroll Professor Emeritus of Ethical Leadership. Wagstaff hired Moorhouse in 1969, the same year that economics became a department. “When he (Wagstaff) joined the faculty, he had a plan to move economics out of the business school and into the College of Arts and Sciences,” Moorhouse said. “He laid the foundation for the department.”

During Wagstaff’s tenure as chair of the new department from 1969 to 1981, he hired new faculty and modernized and expanded the curriculum, which attracted more and more students and majors to the department. “One of the really impressive things about Van’s chairmanship was, in a fairly short time, he recruited a fine group of economists who built a very strong department,” said Edwin G. Wilson (’43), who was provost when the department was established. “To attract people like Don Frey, John Moorhouse, and Dan (’72) and Claire Hammond was a really impressive achievement.”

Most of the new faculty members were young, newly minted Ph.D.’s who learned a valuable lesson from Wagstaff, Moorhouse said. “Van insisted that we not just think about ourselves as economists, but as Wake Forest faculty members. What was good for Wake Forest, the College, mattered a lot to Van. If we came up with some idea for the department, he wanted to know if it was good for our students and if it made sense for the College.”

Dan Hammond (’72), the Hultquist Family Professor and current chair of the economics department, still remembers the first time that he met Wagstaff. Hammond was a sophomore planning on majoring in history when he took an introductory economics class with Wagstaff.

“Van’s charm and his ability as teacher, and his ingenuity attracted me to economics,” Hammond said. “He clearly liked what he was doing, and he enjoyed being around young people.”

Hammond majored in economics and reunited with his former professor when he and his wife, Claire, joined the faculty in 1978. Hammond said the standards Wagstaff set as department chair — most notably a family-friendly, cordial and collegial atmosphere — still guide the department.

Wagstaff was the type of professor who organized picnics and softball games for students and professors, Moorhouse said, and he once built a raft for faculty members to use during the annual Yadkin River race.

Wagstaff grew up in Harnett County, North Carolina, and was a flight-simulator instructor in the U.S. Navy during the Korean War. After he left the navy, he attended Randolph-Macon College and received his undergraduate degree in English. He earned his MBA from Rutgers and his Ph.D. from the University of Virginia.

He was the first director of Wake Forest’s former Urban Institute, formed in 1968 to address problems with housing, education and employment in Winston-Salem. He served on the first board of trustees that guided the development of Graylyn into a conference center in the early 1980s.

Wagstaff was also active in the community. He was the first chairman of the City of Winston-Salem’s Citizens Budget Advisory Council and a member of the board of trustees of the North Carolina Council on Economic Education.